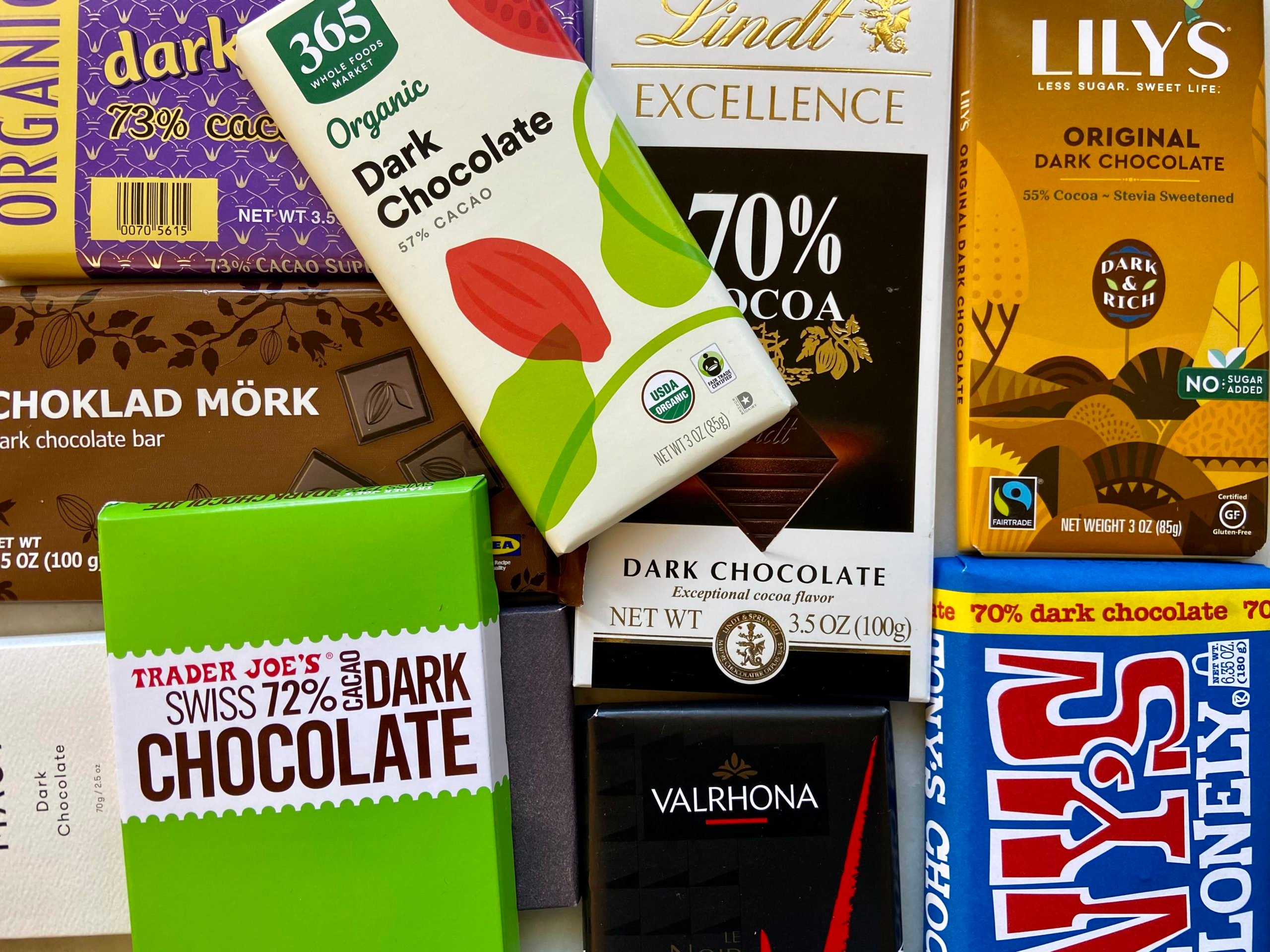 Last week, I was charged with a task that can best be filed under “Nice Work If You Can Get It…”

Heading into the holiday season, as gift guides bombard us with images of artisanal, handmade chocolates that can cost a small fortune, we wanted to find out: What is the best chocolate bar most of us can just pick up around the corner? And it appeared that only an official Cup of Jo Taste Test, conducted by the four members of my house, was going to be the way to get to the bottom of it. 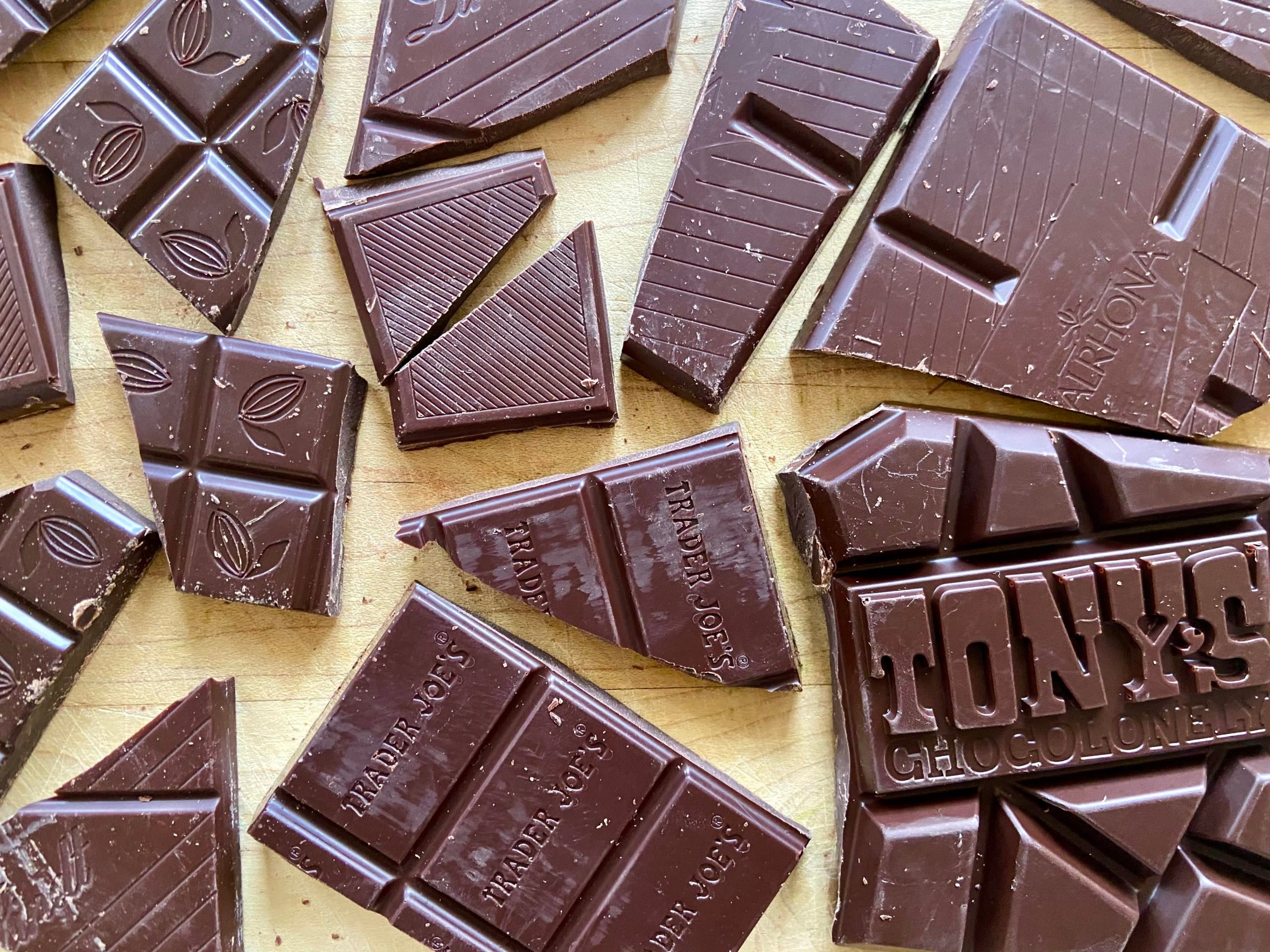 By chocolate, I of course mean dark chocolate (bars with a minimum of 60% cacao, most were in the 70% range) which meant that I automatically lost one of my testers, 17-year-old Abby, who once claimed “people who like dark chocolate are lying.” In her defense, I was exactly like her when I was a kid. It took me a long time to appreciate the complexity of dark chocolate, a journey that began when I asked a boyfriend in college, “Do you like Mounds or Almond Joy better?” and his response was, “There’s only one acceptable answer to that question.” 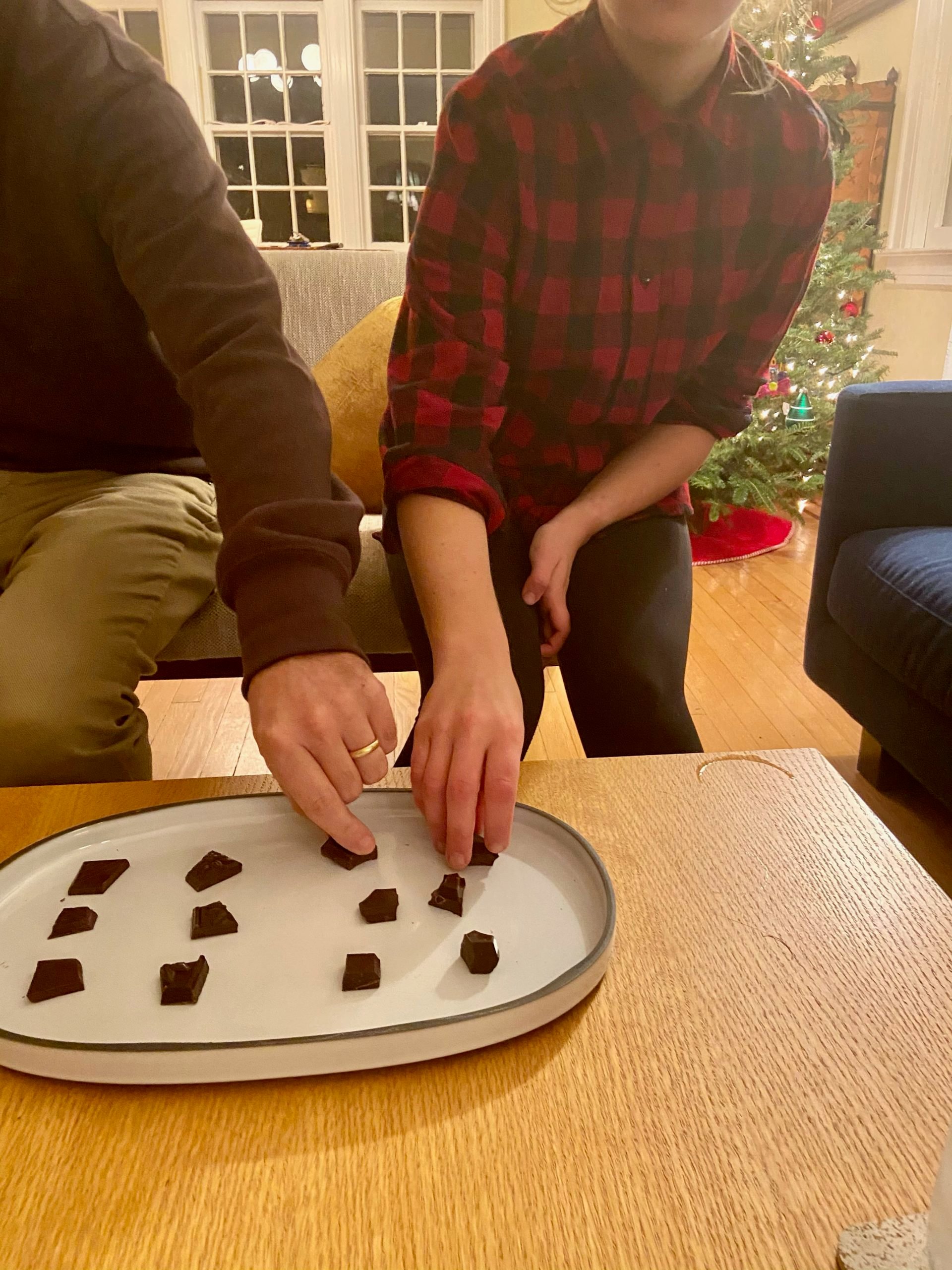 I ended up marrying that Mounds-loving snob, a union I’ve appreciated for many reasons through the years, but particularly so this past weekend, when I needed him to really drill down on things like the fruitiness, sweetness, texture, and finishes of nine dark chocolate bars procured from various local supermarkets. (As well as, somewhat randomly, Ikea.) Our other daughter, Phoebe, whose taste buds take after her father’s, and who has always loved punctuating a meal with a square or two, would be the other. Unlike previous taste tests where products were graded, I decided to up the excitement factor a bit and organize this one tournament-style. (Do I need to remind you that we are short on home entertainment these days?) There would be three rounds (plus one qualifying round) and in each round, two chocolates would be pitted against each other, with the winner advancing. 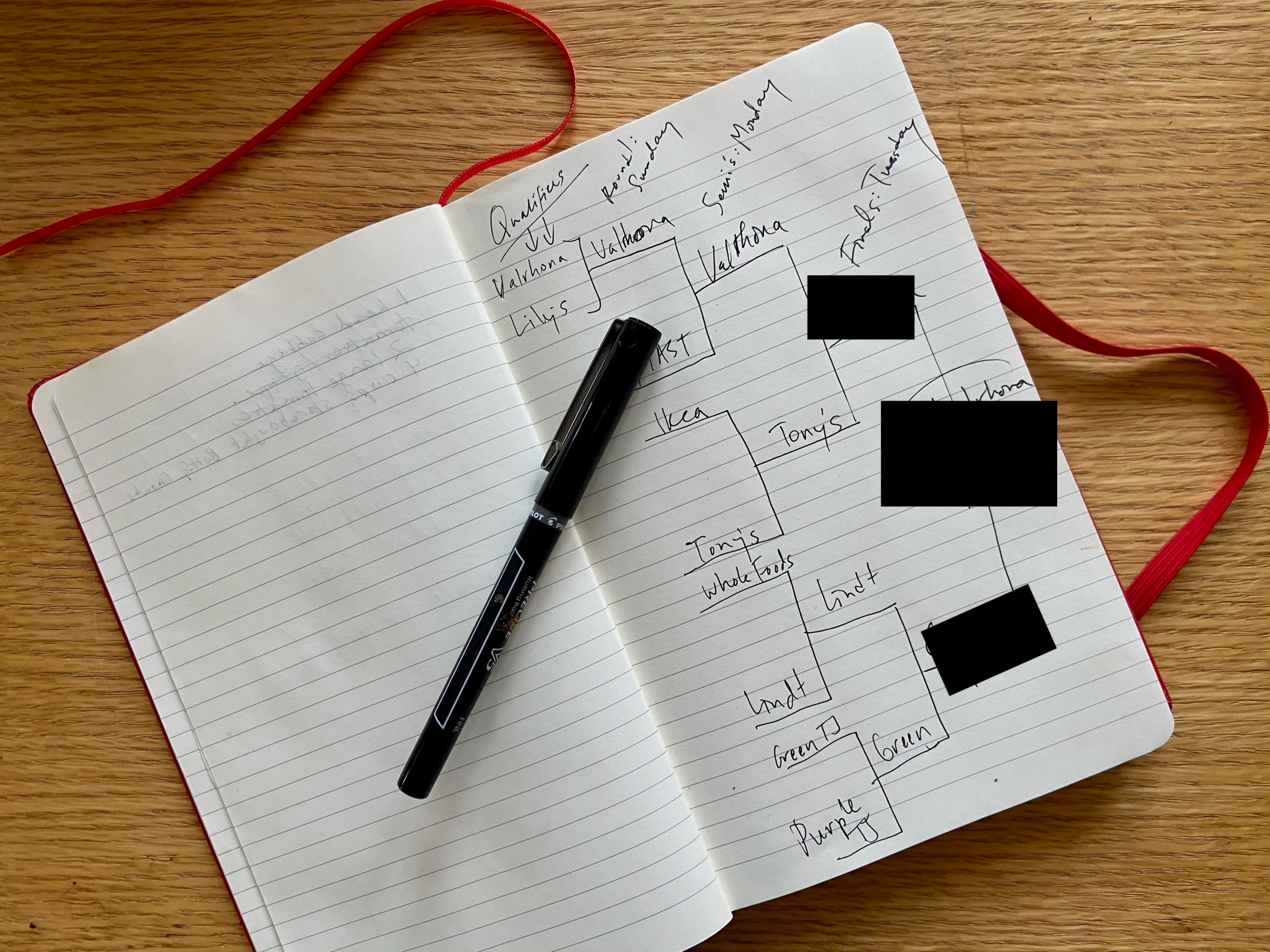 Lest you doubt the integrity of the process, allow me to present the official (redacted) tournament draw above. I was the only one who saw the draw because I would be the one supervising the blind tasting, taking notes while they nibbled. If they did not agree on which one should advance, I would be the tie-breaker. As with previous tests, all tasting was blind, and as we got further into the tournament and they knew which bars were advancing, they still didn’t know the order in which I was administering the bites, and which brand was pitted against which. 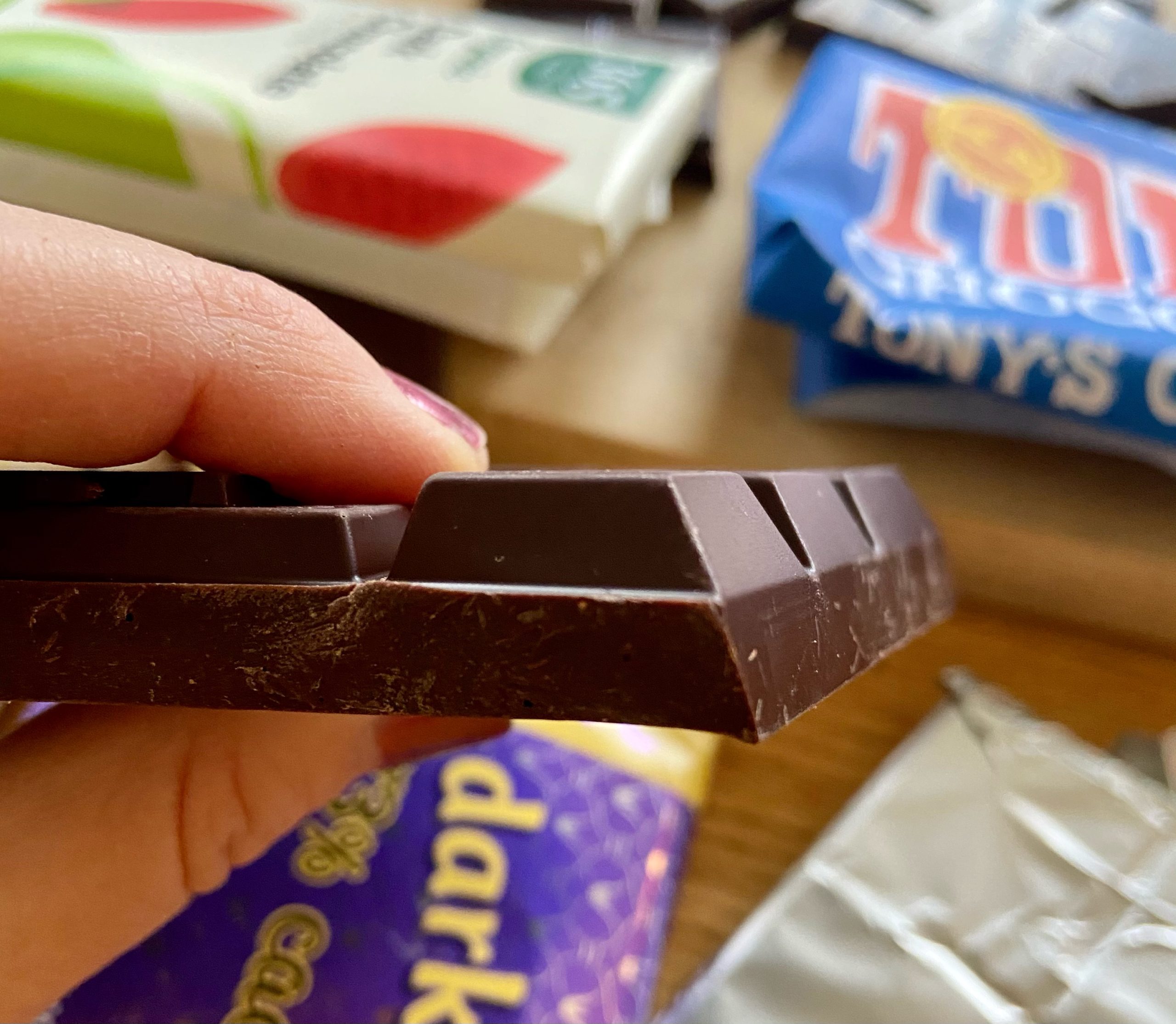 In addition to flavor, I asked them to consider texture (Did it snap loudly or quietly? Was it “a little chonky” as one scientifically noted on bars like the above) as well as mouthfeel (was it smooth or chalky?) and aftertaste (was it a good bitterness that lingered? Or one that had to “literally be chased down with grape tomatoes,” as Abby said after making a brief cameo to try Tony’s Chocoloney.) 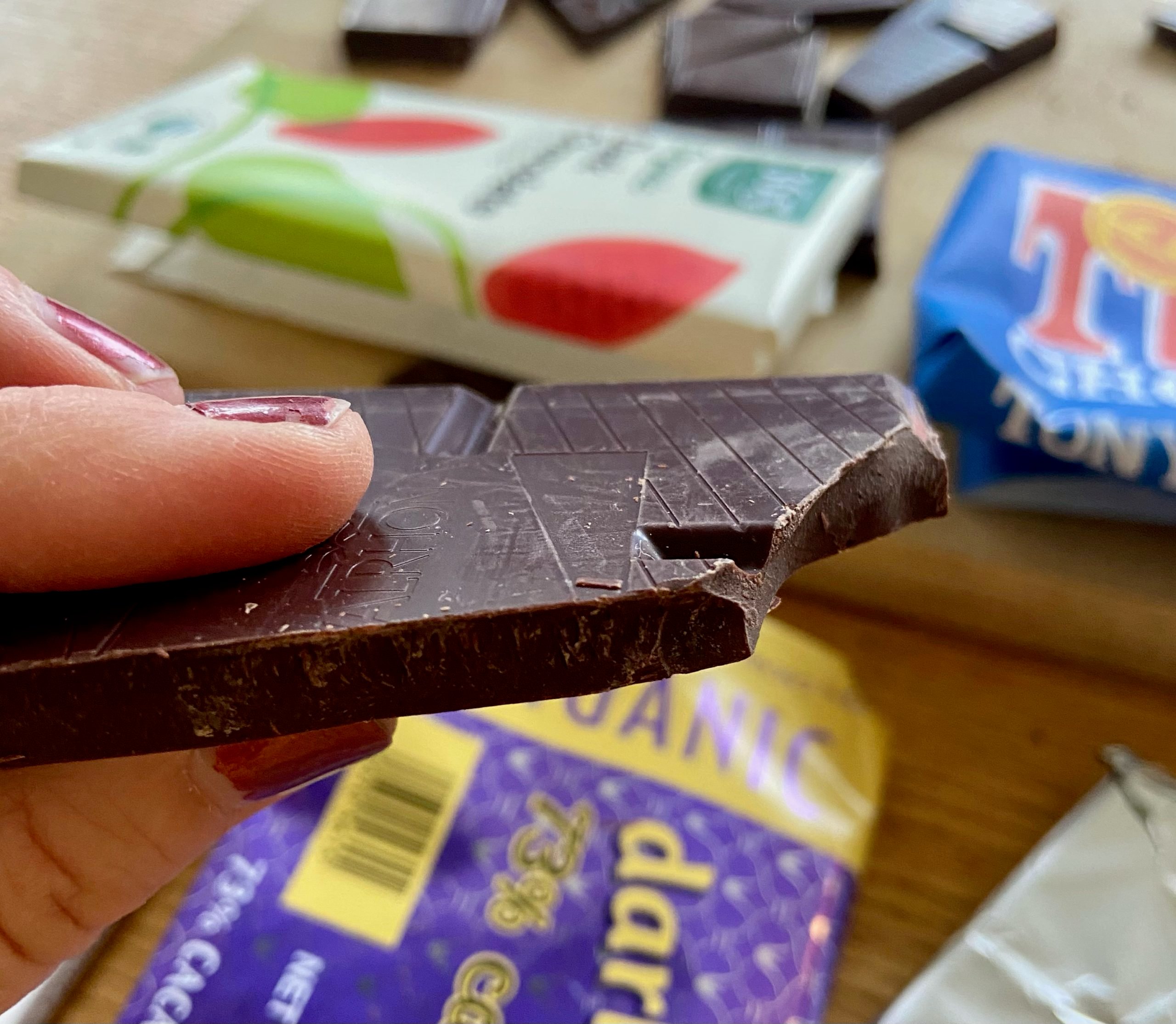 The first round was fairly predictable. A brand called Lily’s — sweetened with Stevia — which I had never before heard of, kept showing up in the various supermarkets I visited so I picked it up out of curiosity. Pitted against top-seeded Valrhona, with Valrhona’s regal “hints of cherry” and “deep complexity,” though, Lily’s never really stood a chance. “Tastes like a Hershey’s kiss,” Phoebe declared before asking, “Are you sure this is dark chocolate?” (With only 55% cocoa content, one of the two lowest of the bunch, that is in fact debatable.) Ikea, similarly, lost to Tony’s, for being the bar with “not a whole lot going on.” Lindt’s 70% easily dispatched of Whole Foods 365 bar which recalled “advent calendar chocolate” for tasting “cheap and sweet.” And though there was some initial buzz around the hotly contested Trader Joe’s Swiss 72% vs. Trader Joe’s Organic 73% match-up — in the end, the Organic ended up defeating itself in undramatic fashion, due to its “medicinal” and “slight cough syrup” notes. 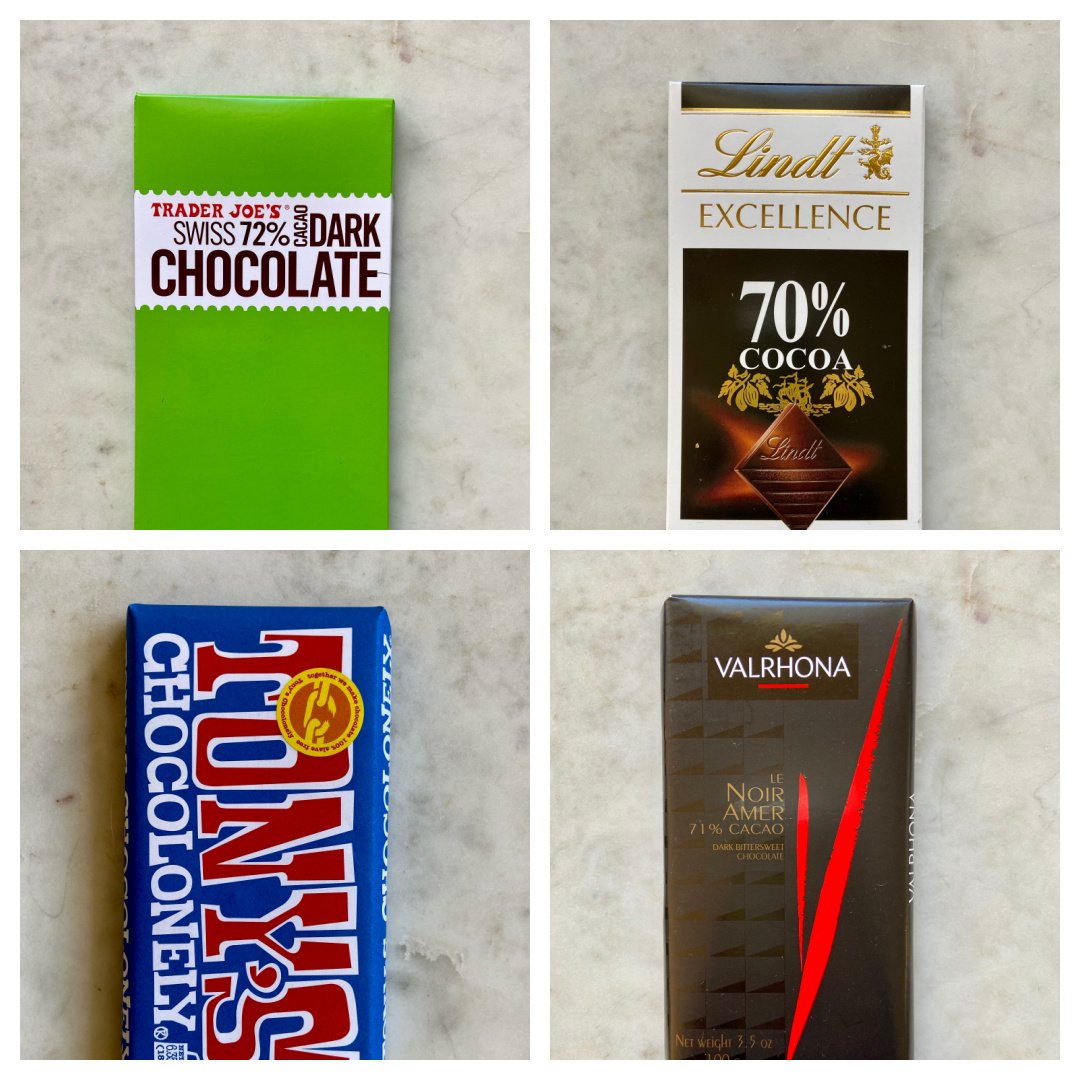 But history is written by the victors, so let’s let them tell next few stories here! Presenting, the final four:

For the first semi-final match-up: Valrhona vs. Tony’s

Valrhona Le Noir Amer 71% Cacao ($3 for 3.5-ounce bar) “This one hits,” Andy said emphatically. “I just love the fruity brightness and the absolute lack of bitterness and clean aftertaste.” Phoebe was also a fan of its smooth fruitiness. “Love the texture.”

Tony’s Chocoloney 70% Dark Chocolate ($5 for 6.35-ounce bar) This one was “much less creamy.” And though Andy got a “light soapiness” from it, Phoebe appreciated the “stronger taste with a big personality.” They both noted that it was a little too chunky and the texture was kind of crumbly and didn’t dissolve in your mouth in the same way as its competitor. (If we were going on packaging, though, I think it would’ve taken home the Cup.)

Result: Both agreed that Valrhona would advance to the finals.

For the second: Trader Joe’s Swiss vs. Lindt

Trader Joe’s 72% Swiss Dark Chocolate ($2 for 3.5-ounce bar) This one inspired some delightful contemplation. “Mmmmmm,” came the first positive review from Phoebe. “Really well balanced, not sweet but not bitter” and “very rich and pleasant.” In terms of texture, “It has a nice snap to it,” said Andy, who overall favors a thinner bar, which helps make a bar “easier to eat.”

Lindt Excellence 70% Cocoa ($3-$4 for 3.5-ounce bar) While they liked the hints of raspberry and appropriate thickness of the bar, that’s where the compliments ended, at least when matched up with Trader Joe’s. “A floral bomb in my opinion, and yet still thin tasting,” said Andy. Phoebe: “I’m not getting a lot of flavor or depth here and the light-ish color is off-putting.”

Result: In the end, it was a drubbing. Trader Joe’s would easily advance to the finals. 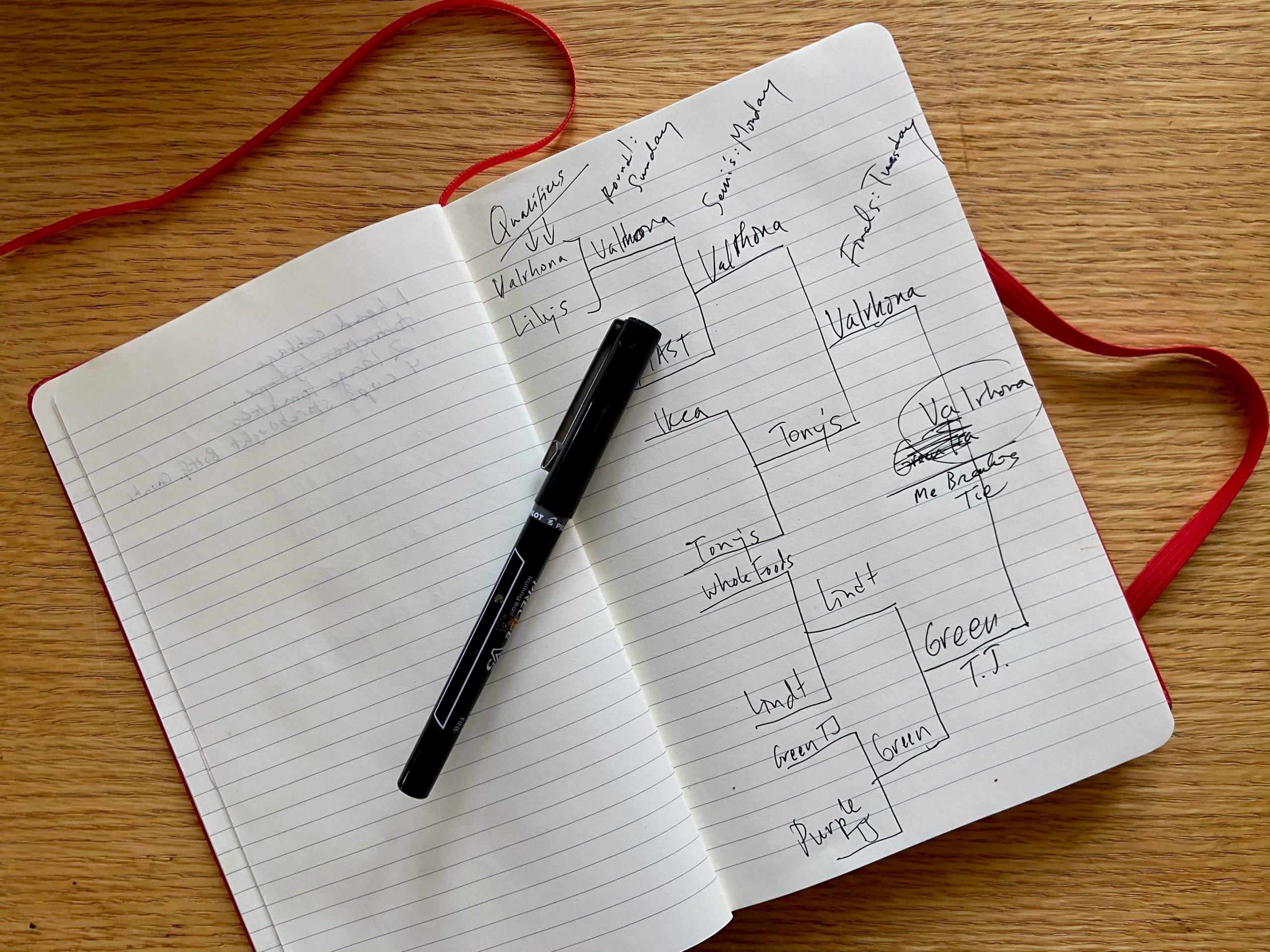 All the drama was reserved for the final round, Valrhona vs. Trader Joe’s. By this point, the cream had risen to the top, and though it was a tough call for both of my valiant testers, they were divided, leaving you-know-who to (finally!) contribute by breaking the tie… 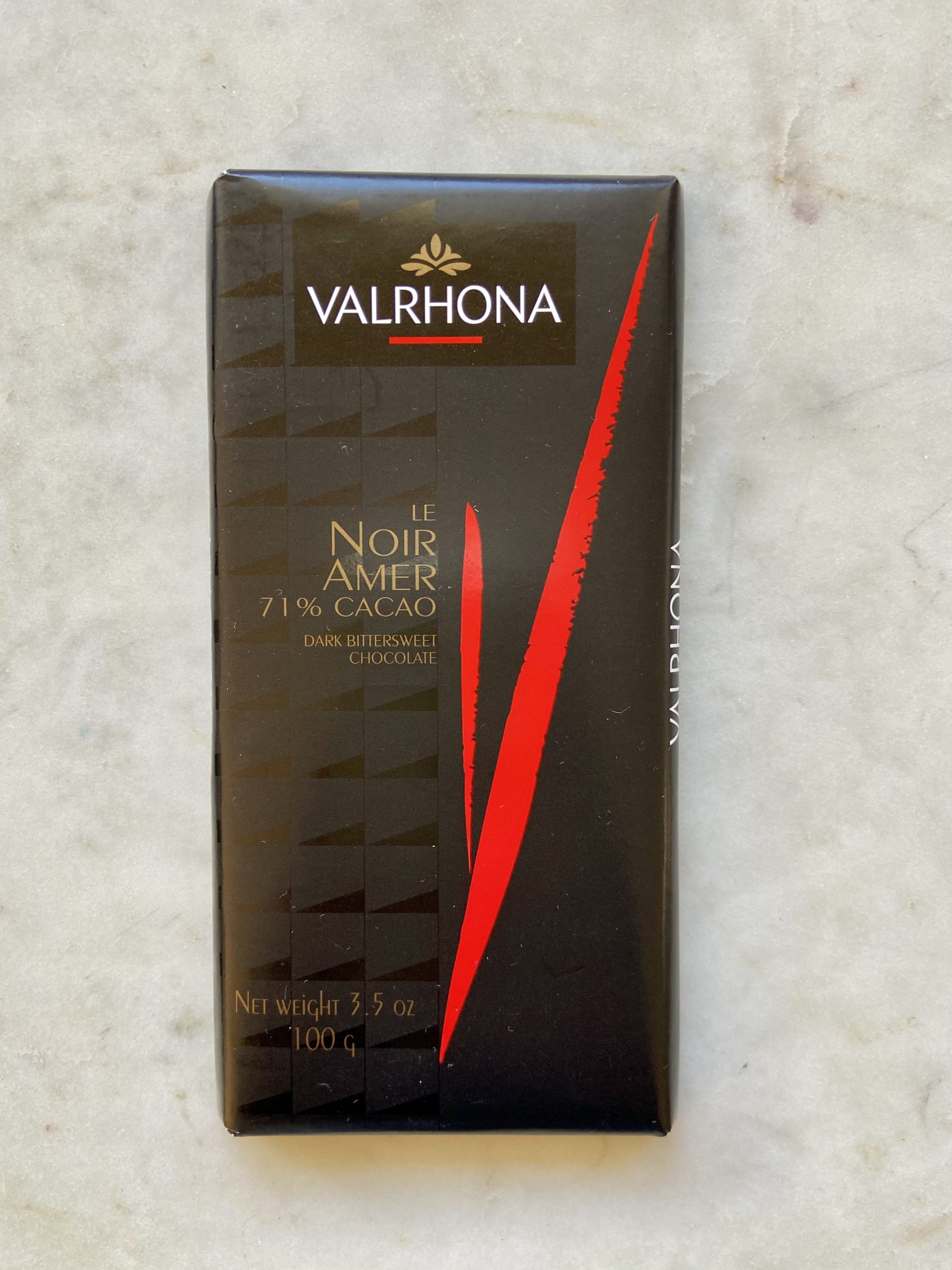 The Winner: In the end, I guess I shouldn’t be surprised that French-made Valrhona, with its blend of Trinitario and Criollo beans, and clean, fruity brightness was the one that won me over. (Also good to know: some quick research revealed it as a pastry chef favorite, due to its exceptional balance.) Some things are iconic for a reason.

What about you? What are your favorite dark chocolate bars?